The intention behind Dogecoin was a joke with a reference to a popular internet meme. It cloned Bitcoin (but forked Litecoin), but the creators had no global ambitions; founder of Dogecoin project”abandoned” it more than once, stating that the coin is useless and has no future. However, despite the founder’s pessimism (whether real or fake) and the coin’s total lack of glamour, Dogecoin survived and grew in popularity. Take ten cryptocurrency exchanges and try to find one which does not trade Doge! Which is the second most popular cryptocurrency in the faucet market? Doge! Hm, what about cryptocurrency casinos? Guaranteed Doge!

Unlike Bitcoin, which is limited in supply, Dogecoin’s emission is infinite, making it an inflationary coin. Naturally, unlike Bitcoin, Monero and other “serious” cryptos, Dogecoin is cheap, but not worthless. Now,, – something which is available infinitely, is not backed up by anything (e. g. gold, fiat currencies, goods), something that is not developing technologically and has an ugly fucking dog as a logo is immensely popular, has value and… ..hit .market capitalisation of $2 billion at some point. What the hell, one might ask?

There are various theories as to why Doge remains strong. The prevalent theory is that it was extensively used for tipping others on Reddit and other various social networks. The transaction time is quick, Doge is cheap and thus is a perfect medium for tipping, yes. Google agrees…:

..but .we don’t. Is the “tipping” industry large enough to amass capitalisation of two billion? Why not tip with a few satoshi/litosh?…

The theory that we follow is that Dogecoin was in the right place at the right time. It filled a market miche. The crypto market needed a lightweight currency which is very convertible and readily available, which is cheap, unlimited in supply and not affected by the fluctuations of the market. If you have a look at the Doge price charts… 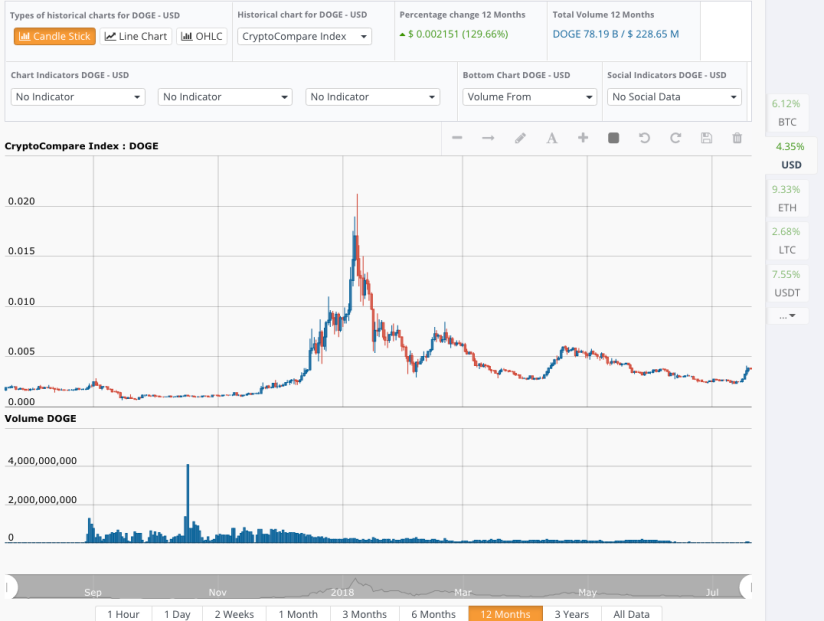 …you will see that, save for an insignificant spike or two, the price is relatively stable. Due to unlimited emission, it is very difficult for one market player to manipulate the price. 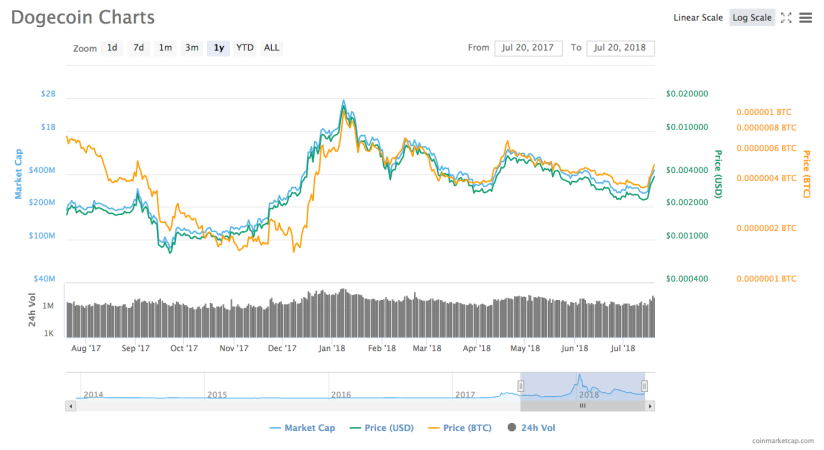 The spikes in price are explained anecdotally, – i. e. at the end of 2017 there were rumours that some mythical Chinese investors will buy out all Dogecoins because of the symbolic connection between the Year of the Dog and the name of the crypto. Naturally, there was no truth behind this, however, in another incident, the Chinese market did affect the price of Doge, – when Bitcoin was under government fire, funds were rapidly converted into Doge…

…and we believe that this is the secret behind Doge‘s longevity.

Anyone remotely familiar with trading knows that time is often of the essence. While Bitcoin network not only was overloaded at some point, but charged insane commissions for transfers between wallets, not mentioning a fee one would pay to the exchanges (sometimes, – twice or more). Converting funds to Dogecoin was a viable solution. BTC to DOGE and DOGE to BTC... Voila. The transfer becomes instant and the fees are reduced significantly.

We at DMYF use Dogecoin to test everything we lay our hands on and have time for; first and foremost, – we use Dogecoin to test cryptocurrency exchanges. Some, like CoinExchange set ridiculously low minimum trade for Doge and offer many pairs, so hey, why not buy some altcoin for a few Doge (“earned” on faucets)? We are not rich enough to spend BTC for exchange review purposes…

Due to unlimited emission, using Dogecoin as a savings vehicle is unwise, while some alts might skyrocket…

We used 10 DOGE to purchase DigiCoin (DGC) on BleuTrade when we were testing that exchange. 10 DOGE was the minimum trade amount (which seemed enormously high, compared to CoinExchange, however BleuTrade is a more serious platform). Of course, a 142% value increase is nothing, considering that the initial investment was child’s play. However, investing 1-10 DOGE regularly, creating a portfolio, monitoring the price changes, reading about coins… Not the worst way to develop some trading skills.

Or, say, you come across an online cryptocurrency casino, – we are currently testing Luckygames, a platform where the minimum bet is only 1 (one) Satoshi (!). However, how likely are we to throw BTC? Naturally, we deposit a few DOGE!

Another factor of DOGEcoin’s popularity, – it is easy as hell to come by. Admittedly, earning 75 DOGE in one day with no referrals using our method requires some effort, but just fauceting, one can easily make up enough DOGE to be able to withdraw them, – then, multiplying DOGE does not require a mastermind. In other words, one does not need initial fiat investment to enter the world of cryptos; merely a mobile phone is enough.

Cloud Mining? Still believe in fairytales? We do. Or, rather, we re-invest our hard-earned DOGE in order to expose scammers and end up broke, but hey, its only DOGE, right?..

…in the worst case scenario, the lost DOGE will be quickly made up using reliable, tested and recommended DOGE faucets:

Register at Freedogecoin and take part in our Dogecoin Giveaway!
Register at MyDoge
Learn how to earn and withdraw up to 75 DOGE a day
Remember, – the cheapest way to withdraw your Cointiply earnings is through Dogecoin.

Philosophically, DOGEcoin constitutes what Litecoin was meant to be, – a lighter, everyday, “penny” version of Bitcoin.

What Dogecoin is NOT used for:

Official ongoing Aelf (elf) airdrop: earn aelf daily – hold to earn interest, or sell on any of the major exchanges.

Do you visit faucets?

Search the DMYF Database for…